I’ve just written a new synopsis for my first novel, so thought I’d share my pain, ahem, I mean pointers.

Is a synopsis going to land you an literary agent?

Most submissions require a covering letter, the first three chapters of your book and a synopsis. An agent will read your covering letter, take a look at the first few pages of your novel and if they like what they see, they’ll want to know where the story is going; does it have enough meat on it; will it sell? Move over chapters; make way for the synopsis.

What is a synopsis?

It’s not the blurb on the back of the book; it’s the nuts and bolts of your story. What happens; what’s at stake and how does the jeopardy rise? Is the ending a satisfying one?

Here are some other essential ingredients:

What shouldn’t you include?

Finally, let other people read your synopsis because if Great Aunt Iris can’t make sense of it, you can bet your life a literary agent will chuck it into the bin faster than you can say Trash.

It’s almost time to send my first novel out into the world again. There’s nothing left to write on its pages.

There was the first draft. Then a literary agent met me and suggested changes. Next, came the second draft.

When the rejection came, I pushed the book into a drawer for a few months. Then somehow the book started niggling at me again. I found the will to push on with the third draft.

Another literary agent liked it, and what happened was this: a major rewrite and a new plot, resulting in draft number four. Cue good reactions from several literary agents, but still an all-round no.

Then one of the agents wrote back to me recommending an editor/mentor, and with her insights I’ve now completed the fifth draft. Let’s hope this draft is fabulous number five.

When Hannah Kent finished Burial Rites, she had a surprising reaction. (Admittedly this was her first draft, not her fifth).

‘I realised I no longer knew what to write. There was nothing more to write. I pushed my keyboard away from me, read the last line over and over, and then – unexpectedly – burst into tears. They weren’t tears of elation or disbelief. I was suddenly, profoundly sad.’

I can relate. Finishing feels like a loss. I’m glad that I’ve got this far, but all those obsessive late nights, all those burnt pieces of toast, all those half-listened to conversations, are gone.

I’m not sad. Neither am I elated; I just feel knackered. I’ve read my book that many times aloud that I sound like I have a forty-a-day habit. During warmer months, me speaking in my characters’ tongues has spilled through the open windows. ‘I don’t want this anymore.’ ‘It isn’t a marriage anyway!’ The neighbours must think I’ve got multiple personalities. Either that or I need a bit of marriage guidance counselling.

And I have to admit, I do feel slightly unhinged. A chapter of my life is now over. This book is just about as good as it ever will be; it’s do or die.

I’m stepping into some new place, some other writing project, something that might give me yet more oxygen. Because writing is like breathing to me: it’s the only way to live.

Do you plot or free-flow?

Some writers start off with a massive sheet of paper, scribbled with charts and graphs.  They jot down just what’s going to happen from the very first page to the turning point, right through to the climax and beyond.

If that sounds like you, you might be writing a plot-driven novel. And I envy you – your destination might be miles away, but you can see it there like a landmark in the tiny distance.

If you just scribble down rough ideas for characters that’ll leap into the murky situations you create for them, you might just find yourself in the territory of the character-led novel.

‘You have a character-driven novel,’ an editor recently told me. ‘So the plot depends on how each character evolves.’

When I started writing The Maid’s Room, I had three characters in mind. I jotted down a couple of key events, read a few text books about how to write a novel then blundered my way through. Even though the book got placed in a competition, that first draft was pretty amateurish. There were enough self-conscious phrases to leave you moaning in pain.

But I wasn’t giving up on it – I knew I had strong characters, so I tinkered, and edited, titivated and rewrote. Then finally a renowned literary agent gave me a good talking to. She loved so much about the book, but the plot was just so flipping depressing. Well, it certainly wasn’t going anywhere the way it was, so I decided to rewrite it.

That’s when I went down the graphs route. My friend, Lucy, thought she was taking me out for a birthday lunch. Instead, I unravelled my A3 sheet of paper complete with columns and arrows, capital letters and conclusions. Lucy managed to look interested. The characters would remain the same, the setting too, but there was a new plot for them all to fall into.

I started writing, knowing what was going to happen, and it did. It was just the characters got a bit distracted along the way. Next, another agent referred me to an editor who’s now keeping me on the straight and narrow.

So I started off a free-flower and have ended up a plotter.

With book two, I think I’d feel safer having a plan, but until you get to know your characters, how can you work out what they’re going to do? Which means I’ll probably head down the same route – create characters, put them into awkward situations then see how they react.

This piece was inspired by a post by author Claire Fuller. 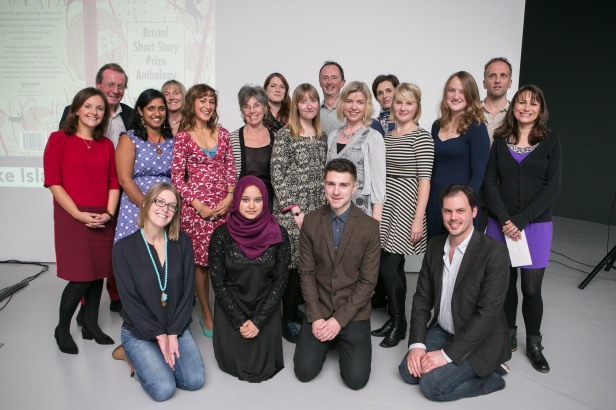 I had no idea what I’d let myself in for when I accepted my invitation to the Bristol Prize Awards Ceremony. What would the atmosphere be like? Would we have to stand on a stage with shining spotlights turned off one by one until the winner was announced?

Inside the vast space of Bristol’s Spike Island gallery last night, the air was fat with nerves – or maybe that was just me. I picked up a glass of wine from the table and hand aquiver, I just about baptized myself with Sauvignon Blanc.

Bristol Prize co-ordinator Joe Melia talked us writers through what was about to happen.

‘This is all about celebrating your writing,’ he said. Some of the tension fell away.

Here was a bunch of writers at different stages in their careers – a published novelist, a creative writing tutor and others who, like me, are just at the beginning.

So much to talk about. Do you ask friends to read your work? Have you got an agent? And, and, and….

And then it was time for the show.

Images of the stunning designs submitted for the anthology cover flashed onto the wall. The Mayor of Bristol stood up to speak, followed by novelist Patricia Ferguson.

And then came the moment of judgement. Would my name be in the winning three? Hands white-tight on the side of the chair, breath held, the names of the runners up were read out. Three, four, five. I heard my name. I hadn’t won. Was I upset? Disappointed? No way – at last I could breathe again, high on my prize – my first ever piece of published fiction – The Colour of Mud.

Big congratulations to winner Mahsuda Snaith and to all the other writers in the anthology. Didn’t we have some party?!

The evening was a highlight of my year – inspiring chats with authors, an agent, and all the lovely people at the Bristol Prize.